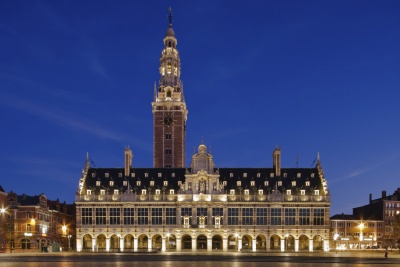 Type of course
Full-time and part-time

In the KU Leuven MEPP programme, you strive to become a specialist in European policy-making and public administration. With this degree you will be effectively equipped to pursue a high-end career in EU governing bodies and its international and non-governmental partners.

In this one-year postgraduate programme, you will gain deep insight in and perform academic research on European politics and policy, whilst mastering professional skills in decision-making and public management. You will attend interactive courses by renowned academics and EU professionals, collaborate with your fellow students in practical sessions and individually perform an academic inquiry on a topic of your own choosing.

Furthermore, you will visit some of the most prominent European institutions such as The European Commission and the European Parliament. Applying KU Leuven’s outstanding research-based education in a small and international student group, the MEPP programme offers an intellectually challenging and inspiring environment. As a MEPP graduate you will develop the profile of a comparativist a researcher or a Policy or political analyst.

Therefore, as a KU Leuven MEPP graduate, you will become part of a reputable network of academics and professionals in European policy-making and public administration. MEPP furthermore prides itself on being an EAPAA-accredited programme. The European Association for Public Administration Accreditation (EAPAA) is Europe’s leading accreditation agency when it comes to Public Administration and guarantees MEPP's high standing educational quality.

MEPP Students develop a strong understanding of Public Administration and Management, with courses on European decision making and policy fields in the first semester. Class discussions and questioning is encouraged, requiring you to prepare for lectures in advance. Group work and/or presentations are part of the teaching method, requiring significant work outside of class. Throughout the year students will work on their dissertation.

The programme is built with the following courses:

MEPP students have the option to spend one semester abroad without any extra registration fees at one of the Top-universities in our EMPA network consortium. This European Masters of Public Administration Consortium (EMPA) facilitates students and staff exchange building on respective strengths and specializations of the participating institutions:

“MEPP courses are presented both by academics and experienced practitioners. Therefore, I get to know a wide spectrum of views on challenges of European integration”
— Sime Zane, MEPP 2014

“The reputation of KU Leuven and its proximity to the very core of Europe convinced me that KU Leuven is the “mandatory stopover” to achieve my future goals”
— Caterina Cigala, MEPP 2014

“Thanks to its high academic standards and constant strive for excellence, MEPP greatly contributed to advance my analytical skills as well as to deepen my knowledge of public affairs. As importantly, by bringing students from many countries together, MEPP demonstrates that the idea of Europe is not just a concept, it is also a reality”
— Guillaume Goessens, MEPP 2017, First secretary at the Belgian Embassy in Jakarta

From Renaissance philosophy to cutting-edge nanotechnology: as one of Europe’s oldest universities, KU Leuven boasts a long tradition of ground-breaking research and high-quality education.

According to international rankings, KU Leuven is among the best 100 universities in the world. Our University is currently ranked 48th in the Times Higher Education World Ranking (2019), and 81st according to the QS World University Rankings (2019). In 2016, 2017, 2018 and 2019 Reuters named KU Leuven the most innovative university in Europe.

Study in the Heart of Europe

KU Leuven offers study programmes on different campuses in the most important cities of Flanders, in the north of Belgium.

Belgium is located in the heart of Europe. Its capital, Brussels, is home to various government institutions, such as the EU and NATO. There are also hundreds of multinationals that have their headquarters in and around the capital; this not only makes for a pleasant hustle and bustle, but it also gives the city its international and cosmopolitan character.

As a student or researcher at KU Leuven you are in the heart of Europe. London, Paris and Amsterdam are only a stone's throw away and various low-cost airlines take you to Europe's biggest cities in no time. Belgium has a rich history. It's a country with beautiful cities, but it’s also rich in art and architecture: you will discover a country of surprising contrasts.

Some Remarkable Figures about KU Leuven: